"He came over and asked us what we were doing," recalls Jane Winchell, director of the PEM Center for the Arts and Nature and curator of natural history. "He said, 'These trees didn't exist before, did they?'" But the trees went unnoticed by many until they were painted blue for Konstantin Dimopoulos' blue tree plantation.

Using a non-toxic lime-based paint, Dimopoulos drew attention to local trees to highlight the global threat of deforestation, a major contributing factor to climate change and biodiversity loss. Its PEM load is the 27th in the world.

"The Blue Trees" is one of several environmental exhibits held at PEM. Winchell is leading PEM's new work on climate and environment, and so far, he says, "being involved has been a very rewarding, challenging and motivating process."

Other exhibits on display include a collection of works by nature photographer Stephen Gorman and New York artist Edward Koren, featuring photos of polar bears struggling to survive in the Arctic Ocean, along with the furry anthropomorphic cartoon animal of Koren. Man-made climate risks. "Climate Change: Inspiring Action" highlights climate solutions through the work of various contemporary artists.

As news about the climate crisis continues to spread around us, conversations about it are becoming more and more a part of everyday life. Police recently blocked a central highway in Massachusetts, arresting 15 protesters, shutting down daily workers, and disrupting Massachusetts' new fossil fuel infrastructure.

"There really is a barrier where people can talk [about the climate crisis]," Winchell said, adding that art can start conversations, make climate statistics understandable, and break down these barriers. "Art connects with us on an emotional and human level and explores the sensitivity that exists within all of us," he says.

"Art allows visitors to explore climate change with others and develop a commitment to collective action on the climate crisis," said Miranda Massey, director of the Climate Museum. 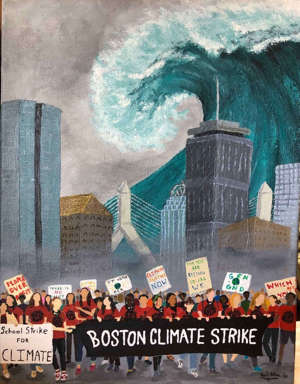 © Anjali Mitra, The Seas Are Rising and So Are We, 2020 (Courtesy of PEM) provided by Boston.com

From destruction to inspiration.

Winchell points out that sometimes art related to the climate crisis can be tragic and sometimes inspiring, and that both art forms play a role in the climate conversation.

In "Beneath the Bone," for example, it ends darker: a muddy polar bear stares into the camera alongside a disdainful movie animal perched on its bones. But the Climate Change: Inspiring Action exhibit is in an adjacent room, offering viewers a chance to embrace a more hopeful future.

"We can't have disruptive wisdom without a work balance that shows where we can go, how we can progress," Winchell said. Art plays a pivotal role in shows like Down to the Bone, but is a visionary in Inspiring Action.

"Where people can get emotionally, that's where we put it. That's what you can do," says Winchell. "This is our chance."

One of Winchell's favorite local exhibits, Where the Questions Live: A Man's Study of Nature, curated by Wes Bruce, takes place before Inspiring Action. Bruce's engaging multimedia exhibits explore the human relationship with nature, and visitors love them.

“There are so many beautiful messages that people are leaving…how they feel and understand their connection to nature in new and powerful ways,” says Winchell.

The exhibition creates a moment of awareness with nature inside the building; It's not a jungle walk, but it can be more inspiring for some visitors.

The Peabody Essex Museum is also looking at its own carbon footprint. Starting in December, they will sign a three-year contract with ENGIE to supply 100% of their electricity from sustainable sources of solar, wind, hydro and geothermal energy.

With all of its climate initiatives at PEM, Winchell's goal is to reach the public wherever they are. “PEM is an accessible museum focused on connecting with people's lives,” says Winchell, “and I hope that every time people walk into this exhibit, they come and experience something that speaks to them personally. 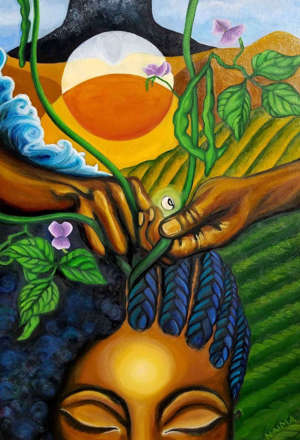 Museums across the country use art to help people connect with nature and better understand it. At the Anchorage Museum in Alaska, director Julie Decker has made climate change one of the museum's central themes, appearing in several exhibits.

Decker told the New York Times : "It's very important that museums don't get too big when it comes to talking about climate change. We have to make them part of our agenda every day. Climate exhibits shouldn't be catastrophic and bleak." ". but on the contrary, they must inspire change.

Last summer, the art museum held an outdoor environmental exhibit – "Garden for Boston" at the Huntington Avenue entrance, featuring gardens of sunflowers and corn, bean and sesame fields in the style of traditional American woodlands.

Massey called the push for more performing arts in the area "important."

"Art reaches all communities and creates a sense of action and connection that transforms our collective culture into climate action," said the director of the Climate Museum.

Stay up to date with the latest news from Boston.com

The publication Art Informs Climate Change Conversations in Museums Here and Across the United States appeared first on Boston.com.

The last iceberg? On Critical Optimism in the Anthropocene

24 thoughts on “Art Spurs Climate Change Discussion In Museums Here And Across The U.S.”