Chadwick Boseman's spirit lived on Wednesday as the cast of Marvel's Black Panther: Wakanda Forever walked the purple carpet for the world premiere and paid tribute to their late colleague.

The actor starred as King T'Challa in the 2018 film Black Panther and has appeared in several other Marvel films. But Boseman died in 2020 at the age of 43 after a four-year battle with colon cancer , which he kept secret. 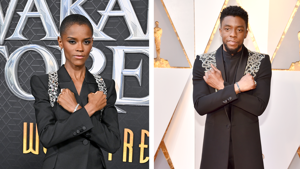 Actress Janeshia Adams-Ginyard, who plays a member of the elite Wakandan warrior group Dora Milaje, covered her entire body in paint, with an illustration of Boseman's face on the back.

Ryan Coogler, director and screenwriter of the Black Panther films, wore a necklace with a photo of Boseman on it. 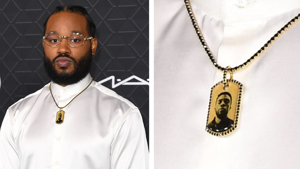 © CBS News Ryan Coogler has a gold necklace with Boseman's face around his neck.

Lupita Nyong'o, who plays Nakia in the Black Panther franchise, told The Associated Press that she was "relieved" at the premiere when Coogler showed her the script because she wasn't sure how to handle the death of the actress would handle.

"I was scared. "And as he walked past me, I said, 'Oh, uh, we don't have to pretend we don't grieve, you know? We have to take our grief and add juice to it. Chadwick's legacy.'

Angela Bassett, who plays T'Challa's mother, Queen Ramonda, said at the premiere that she and the entire cast reflected on Boseman's absence during filming.

"There's such an energy in the room with the people, with the script, with our director, with our Chadwick, with his light that it had to move on," he told The Associated Press. "We were supposed to sit down for a minute, but we didn't want to sit down.

Earlier this week, singer Rihanna released a clip of her song "Lift Me Up" for the upcoming movie, her first new song in years, and also paid tribute to Boseman.

Black Panther: Wakanda Forever opens in US theaters on November 11.