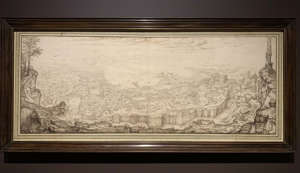 © Steven Litt/cleveland.com/TNS A 1582 panorama of Naples by Jan van Stinemolen from the collection of the Albertina Museum in Vienna is part of the Tales of the City exhibition at the Cleveland Museum of Art.

CLEVELAND, Ohio – One of the world's strangest and most beautiful paintings is featured in the Cleveland Museum of Art's new international loan exhibition, "Urban Tales: Dutch Painting from Bosch to Bruegel."

With 91 paintings from the Albertina Museum in Vienna, nine from the Cleveland Museum, and a private collection, the exhibition shows the growing power and reach of painting as an art in the Netherlands during the 16th century.

An example that draws attention in this regard is the "Tree Man" painted in pen and ink by Leronimus Bosch in 1500-1510. He is famous for his three-panel celestial nightmare masterpiece, The Garden of Earthly Delights. For the Prado Museum in Madrid.

The design reproduces part of the Prado triptych, which depicts hell as a fiery landscape with scenes of torture and agony. Overlooking the hellish landscape of the wilderness is a giant hybrid creature with the head, chest, and arms of a human, transformed from two boats floating on a lake into dangerously rooted giant tree trunks.

The mood in Albertina's painting has changed. A tree man appears in the middle of a rural landscape with a city skyline in the distance. From his giant arms and shoulders, his chest opens like an eggshell, revealing a bar full of mischievous drinkers gathered around a table inside.

Meanwhile, the top of the tree has a round saucer like the brim of a hat. He is carrying a giant jug that comes out of his mouth with a ladder. A man climbs a precarious ladder and ties a cable to a flag decorated with a crescent moon, symbolizing the threat of an invasion of Ottoman Europe.

Bosch's paintings are one of the most famous and creative images in the history of art. In The Cleveland Show, he plays a unique role as a portrait that foreshadows his medium's rise to prominence as a powerful, independent form of expression.

As Emily Peters, curator of prints and drawings at the Cleveland Museum of Art, suggests, the exhibition challenges an old historical bias against Renaissance painting in Northern Europe.

In an interview with cleveland.com and The Plain Dealer, Peters said Dutch paintings of the period were "somewhat lacking" compared to the paintings of Italian Renaissance master Michelangelo.

"My challenge was to paint the big picture," he said. He wanted to show that 16th-century artists in the Netherlands were "at the forefront of innovation and interpretation in this new world, very different from 100 years ago".

The free exhibition, which runs until Sunday 8 January, takes visitors on a comprehensive tour of 16th-century life in the provinces now known as the Netherlands, Belgium and Luxembourg. The region's booming commercial and industrial cities, such as Antwerp, Bruges, Haarlem, and Amsterdam, trembled under Spanish rule, faced religious controversy, and struggled with the moral challenges raised by the first waves of capitalism and world trade.

At this time, the Protestant Reformation, which lasted from 1568 to 1648, followed by the Catholic Counter-Reformation and the eighty-year war for Dutch independence from Spain began.

As an exhibition that fills five galleries with small brown paintings on paper, the gallery can feel sleepy. It is completely false.

Albertina Cleveland's show is as lively as it is rare. With more than one million works on paper presented by the eponymous duchess of Saxe-Tesche in 1776, the Albertina Collection is one of the largest and most beautiful collections of prints in the world.

The paintings seen in Cleveland, which form the core of the Albertina's collection of Dutch Renaissance paintings, have never traveled as a group outside of Europe, Peters said.

The two Bosch paintings are rarely exhibited in the gallery because they are sensitive to light. According to him, the collection of paintings by Peter Brueghel the Elder, including scenes from the films "Judgment Day", "Christ in the Earthquake" and "The Sin of Unemployment", was last exhibited in the United States in 2001.

The Cleveland Gallery's graphics have a presence and intimacy not found in the gallery's beautifully illustrated catalogs. Some are so fresh they could have been painted yesterday.

For example, Hendrik Goltzius's large self-portrait in black and colored chalk and watercolor, circa 1593-1595, and the accompanying portrait of Jacob Metham, Goltzius' artistic son-in-law and son-in-law.

Looking confidently at the viewer and dressed in elegant clothing, including ruffled collars, the pair represent 16th-century Holland.

Artists of the time made paintings as decoration for home display, as prints for sale in large editions, as production records for their studios, as evidence of skill, and as paintings or caricatures, including stained glass windows for churches. or in individuals.

Among the most impressive works in the gallery are two pairs of 7-foot-tall paintings by Jan de Beer of Antwerp, 1515-20. For Christians to be forerunners of Christ. The windows are gone, but the graphics remain.

Other artists responded to the growing demand for panoramic views of cities that could be considered good examples of art and projects.

The 1582 Panorama of Naples by Jan van Stinemolen is a good example of this genre. It seemed to represent every building within the fortified walls of the city. Stinemolen used incredibly fine gradations of progressively lighter ink to convey spatial depth, as if the landscape was shrouded in a light mist as it receded into the distance.

Other Dutch artists showed a talent for painting scenes of everyday life in the 20th century.

Three of Roelant Savery's paintings, one in the Cleveland collection, show a bohemian peasant couple, a peasant seated with a basket, and a peasant riding one of two saddled horses.

The paintings were inscribed 'les het livin', which means 'the living' in Dutch, and proved for the first time that Western artists had consciously left the studio to record the everyday life around them.

Artists have also used painting to challenge authority and ask moral questions without crossing boundaries or provoking responses from religious or political authorities.

For example, in 1556 Bruegel the Great depicted a helmeted fisherman using a giant serrated knife to fillet a giant fish. Dozens of small fish fall out of its gaping belly, and a large fish spits more out of its mouth. And small fish throw smaller fish.

The book "Big Fish Eats Small Fish" expresses dissatisfaction with the economic system that divides people into winners and losers.

These works convey their message immediately because the themes they explore are universal and enduring.

Perhaps the most moving and disturbing image in the exhibition is a painting by an unknown artist from around 1540. It fills a page with 31 equally spaced images of disfigured and misshapen men walking or crawling with rudimentary prosthetics.

The meaning of the painting is ambiguous. The show's catalog suggests that such images evoke sympathy and benevolence, and that outward signs of illness are signs of personal failings. In other words, painting can deal with guilt and shame.

However it is interpreted, the image is as shocking and provocative as the depiction of the homeless living on the streets of San Francisco today. This is a picture of social collapse.

As Dutch Renaissance paintings well demonstrate, they are just as important today as they were 500 years ago.