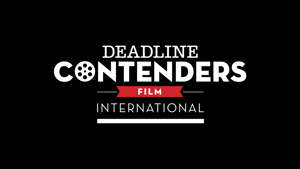 With nearly every major film festival physically returning to the first calendar year post-pandemic, 2022 has provided a huge morale boost for filmmakers around the world. And now, with the third installment of Competing Films Deadline: International kicking off on Saturday at 8:00 am, its reach has been further expanded: leaving a carbon footprint, our online event will showcase Sundance-grown films. , bewitching Berlin, mesmerizing Cannes, electrifying Telluride, enlivening Venice and dazzling Toronto, highlighting must-see films.

Click here to register and watch the members live today.

As the number of submissions for the Academy Award for Best International Film continues to rise—nearly 30% more than just 10 years ago, helped, of course, by Parasite 's breakout success in 2019—it's hard to see where the race for awards is heading. Tonight's show is meant to speak to the stars, directors, producers and writers to help cut through the hype and get behind the scenes stories viewers want to know about the origins of the new Drive My Car .

From the Berlinale will come " Beautiful Creatures " by Michael Koch (Switzerland), Arnar Gudmundsson Gudmundura (Iceland) and Carla Simon (Spain), Alcar and Gabriel Martins (Brazil), as well as "Mars One " by Sundance from Marina Klondike . Calf (Ukraine). Venice, meanwhile, is represented by films such as Bardo by Alejandro González Iñárritu, The False Chronicles of a Handful of Truth (Mexico), The Box by Lorenzo Vigas (Venezuela), Saint Omer by Alice Diop, At Work : Missing » Erica Matti. 8 " . and Argentina, 1985 (Argentina) Santiago Mitre.

Like every year, this is an incredibly rich and varied work: thrillers, comedy-dramas and even mixed documentaries, touching on both global and personal topics. Whatever happens on March 12 next year, all these films have a place in the conversation.

Check out today's schedule and lineup of speakers below, and follow Deadline throughout the day to highlight our panels on the site and on our social media using the #DeadlineContenders hashtag. We're looking forward to Monday when we launch an event streaming site with a full video bar.

The decision to leave

All is calm on the Western Front

Bardo, a false chronicle of a handful of truths

Tomorrow is a holiday

Moving picture of an oak tree

The study of reality by M.M.

A piece of heaven

where the wind blows