Chants of "Women, Life, Freedom" rang out on Sunday in New York's Roosevelt Island as hundreds of people gathered to revive an art installation symbolizing solidarity with the women leading the Iranian uprising.

In the center of Franklin D. Roosevelt's Four Freedoms State Park, a giant portrait of an Iranian teenager's face, printed on cotton canvas, lay on the ground. More than 300 protesters lined up behind her and waved in imitation of her long hair.

The image resembles that of Nika Shahkarami, a 16-year-old Iranian woman who disappeared in September while standing on top of a fallen trash can and waving a scarf before being set on fire. More than a week later, his family learned that he had passed away.

Iranian officials have not responded to CNN's request for information about Nika's death, but her mother said she believes her daughter was killed by Iranian security forces during a protest.

Nika was among the Iranian women and girls who fought and risked their lives on the front lines of the Revolutionary Front to take part in the mass protests that began after the death of Mahsa Gina Ami in early September. 22-year-old Amini of Iranian Kurdish origin died after being arrested by an Iranian police officer for wearing a hijab.

Public outrage over his death and a series of protests against the repressive Islamic Republic authorities led to protests. Although some protesters were sentenced to death, hundreds of people were killed, and more than 14 thousand men, women and children were arrested, but the protests continued.

When looking at the New York installation from above, you can see the image of a woman with long black hair dancing in the wind. Back on the ground, the roar of the crowd echoed through the park and along the river.

The mission to challenge art as a vehicle for positive change is part of what inspired the #EyesOnIran project, a series of multimedia art installations focused on Iran at Four Freedoms State Park. Featuring art in front of the United Nations in Manhattan, the series calls for "direct accountability of the United Nations and relevant world leaders," according to the park's website.

The installations are part of the UN's 16-year global campaign against sexual violence to end violence against women. The series, which runs until Human Rights Day on Saturday, was created in collaboration with the creative group For Freedoms, the Coalition of Iranian Women Leaders and the non-profit organization Vital Voices Global Partnership. 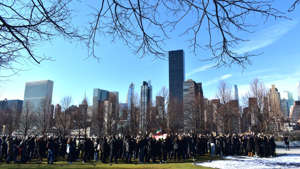 © Courtesy of CNN People line up to experience art . -Ala Elasar/CNN

Some of the women in the crowd were carrying babies, and baby carriages were parked nearby. Many had their faces painted, some carried flags, others drew lines to imitate prison bars. Three women wave the Iranian flag in the air, and one smiles through tears.

"It was amazing," Iranian-American Lemur Batter, 36, told CNN after attending the art event. “Using art as a form of protest and drawing people's attention is a great way to draw attention to the brutal killings in Iran. Importantly, she has a voice, and she gives us the voice we need most. Thank you very much".

This work was created by JR, a French street artist known for his massive photo installations of the 2016 Olympic Games in Rio de Janeiro.

Three weeks ago in Brazil, JR created a similar piece of art depicting the King and protesters to display his hair, and hopes to spread the same idea to other cities around the world.

"These three words – women, life, freedom – say a lot," JR told CNN, standing next to the portrait. "What I try to do in my work is to connect these words with images, to bring Nika's images to life, to make her hair grow longer in every city we go to." 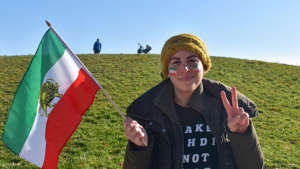 © CNN Produced by Lemore Balter, one of the Iranian Americans who participated in the rally . -Ala Elasar/CNN

While many viewers were accompanied by photographs of Iranian women and children affected by the protest in red, green and white , others included various New Yorkers and visitors from around the world.

Most of those who came from Iran, including Baleter, have never been to this country. As Jews, Balter's family emigrated decades ago, fearing persecution. Today, he wishes he could be there – but for now, at least, his wish is simply impossible.

"It hurts. It's like there's a part of me that I can't connect with, that I can't explore, that I can't understand, and I'd give anything for it. This with the Iranian flag painted on it.

"More than anything, I want to give my people the freedom I've been blessed with. What would my life be like if they couldn't escape?"

David Valazzi is an American of Iranian descent who was unable to return to his homeland after the 1979 Islamic revolution overthrew the Shah. He always wondered what would happen if the country was free – with all its glory in art, cinema, music and beauty.

"We have a very beautiful culture and people who really want to show the world who they are," Valazzi, 46, told CNN as her daughter stood by her side. "I think they're really starting to do that."

Valazi believes that art can be a critical path to freedom, not only raising awareness, but pressuring world leaders to implement policies aimed at achieving real change in Iran and, more importantly, saving lives. 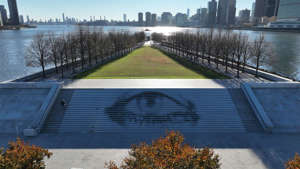 In addition to JR Art's activation on Sunday, the #EyesOnIran project will feature works by Iranian artists, including Shirin Neshat's 1993 proposal Eyes, a black-and-white photograph of an eye printed on the steps of a park.

"When we say that we should remember Iran, we mean that what happened deserves not only our attention, but also our vision," Neshat said in a statement. "Along with brave Iranians risking their lives to claim human rights, many artists from the diaspora and beyond are carrying out our vision to inform audiences and institutions around the world about what they see and what is happening." in Iran. in their hearts and they are obliged to act accordingly".

Baraye, which translates to "for" in English, is a viral song written by Iranian singer Sherwin Hajipour that has become a global protest anthem and an artwork exhibited in conjunction with the United Nations. … parks are being built. The words in "Barayah" contain the names of those who died in the protests that took place in Iran after Amin's death. 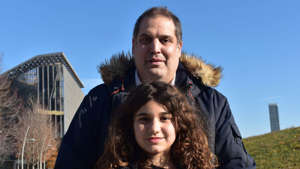 The series reminds Iranians in Iran that they will not be forgotten," Valazi said. But he said it won't be enough until politicians take the artwork's message to heart. "You can get all these artists to amplify people's voices, but unless politicians and people who can lobby step up and show solidarity, we're not going to make a real difference."

His daughter, 10-year-old Katya Valazi, also agrees with her father. Although he is one of the youngest in the group, his passion for his country is bigger than life.

"To my people in Iran, keep your hope alive and don't give up," he said.

For more news and bulletins on CNN, create an account at CNN.com.