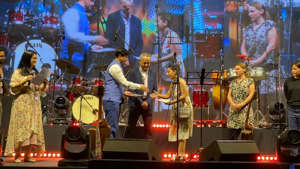 "The team appreciates a simple and subtle coming-of-age story that brings us closer to different generations trying not to deny their identity," FBR said in a statement.

Their win allows them to build a full DI DCP and use Qubewire to distribute the film to film festivals and exhibitions.

"Film Lab experts and producers were once again impressed by the quality of the selected WIP films and the commitment shown by the creators and their crews to the cinematography. Creativity and thematic and stylistic diversity were once again present in all the works shortlisted," the judges noted.

The hands-on workshop was conducted in a hybrid format with online feedback sessions for each film set followed by a film editing session and also online sessions at the Goa Film Market.

"We will expand significantly next year," Ravinder Bhaker, managing director of the National Film Development Corporation, said at the award ceremony. "We are trying to create this platform for international filmmakers, to give like-minded people the opportunity to come here and successfully implement their projects.