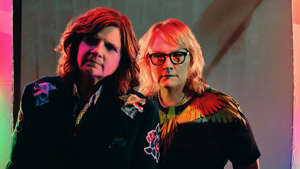 Sundance hopes to take off by staging its big comeback at a private festival.

Indigo Girls to perform at Sundance Opening Night: The Grammy-winning folk-rock duo climb a mountain to premiere their new documentary, It's Only Life After All. Opening Night: Sundance Sampler Presented by IMDbPro will be held on January 19 in Park City, Utah. Proceeds raised will be used to fund the Sundance Institute's year-round work to support independent filmmakers through mentorship programs, grants and other initiatives.

"We are thrilled to have Indigo Girls perform at our opening night party and help kick off the festival by honoring our inspiring storytellers," said Joanna Vicente, CEO of the Sundance Institute. have used their craft to influence their careers." spent as many sponsored artists in the Institute's history. We are honored to have them be a part of this special evening and join us after the screening of Alexandria Baumbach's documentary about their impressive lives," she says. From Life the night before.

Launched in 1989, the Indigo Girls' self-titled debut sold over two million copies and released hit singles such as "Closer to Fine" and "Kid Fierce." The original duo of Emily Salyers and Amy Ray recorded 16 studio albums, sold more than 15 million albums, and built a passionate global fan base while advocating for causes such as LGBT issues, death penalty reform, and Native American rights. They founded Honor the Earth, a nonprofit organization dedicated to local communities, indigenous environmental justice, and green energy solutions.

It's Only Life After All explores the pair's musical collaboration using Ray's personal audio tapes and camcorder footage, along with interviews and archival footage.

“We are honored to premiere It's Only Life After All on the opening night of the Sundance Film Festival and look forward to presenting a live performance that evening. The Sundance Institute supports the work of independent artists bringing stories about the human condition to life. .” It was a leap of faith to agree to star in a documentary about us. In fact, we weren't sure why he was asked! However, the entire crew has earned our trust and we are proud to bring this look to our journey.”

"While it may be somewhat uncomfortable to examine ourselves deeply and publicly, the context of this community places this documentary firmly in our long-term vision of life and art. We have always hoped to be a catalyst for positive change and to empower individuals to feel their value in this world and note." "Behind this documentary. We work with them and know that we are moving towards a day when we will all be seen openly in our humanity."

This event is supported by the George S. and Dolores Dore Eccles Foundation, Acura and Variety .