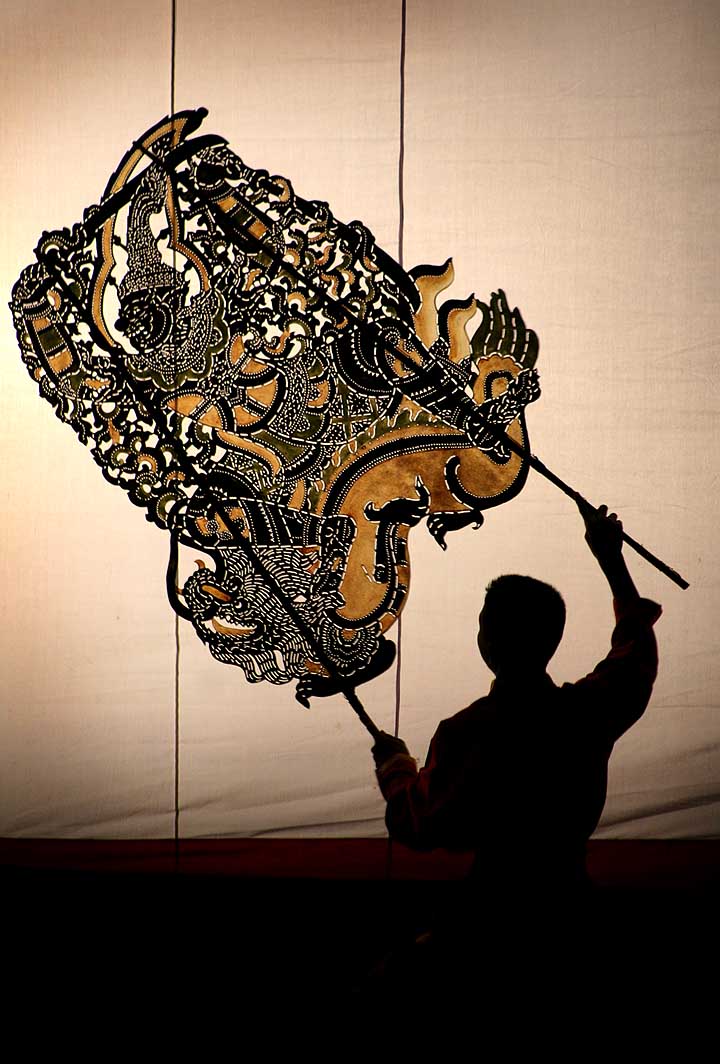 Editor's Note This article was prepared in collaboration with the Columbia University Graduate School of Journalism , Master of Arts and Culture .

Keep or adapt, change or disappear? The dilemma facing most of the long-practiced arts is back in the spotlight, this time at the Crossing the Line festival, where a new performance uses a very old art form: shadows. Generally believed to have originated in Asia (although the exact origin is unknown), the art of shadow theater has historically been passed down from generation to generation in a master box style. Puppetry practitioners and scholars say that as modern performance is dominated by different technologies and mediums, this ancient form of theater is in danger of disappearing.

Puppetry is a global art form in which figures are illuminated by a light source on a translucent screen, casting shadows that are used to act out a story. In countries where shadow theater is a living art, the stories told during the performance are generally folktales that have been passed down. In fact, shadow art traditions have been included in the UNESCO Intangible Cultural Heritage List, with the aim of preserving them and raising awareness of their importance.

For the Crossing the Line festival, New York artist Christopher Myers decided to use shadows in Fire in the Head , a performance about the famous 20th-century Polish dancer and choreographer Vaslav Nijinsky. Myers collaborated with Indonesian artisans to design and create the shadow puppets used in the play, which made its world debut at the festival this fall. “There is a way that this immediacy and indirection of the shadow [puppet] plays into the questions that interest me so passionately: how do our images project onto the screen of the world and how do we deal with it,” he said. Myers stated in an interview with Hyperallergic. A shadow puppet narrative arc followed, along with Nijinsky's portrayal of the inner conflict, immortalized in the diaries he left behind.

Elsewhere in New York, Chinese Theater Works has been using shadow puppetry since 1990 as part of an effort to adapt traditional Chinese practices for American audiences. Using traditional-style puppetry, the group uses overhead projectors as a modern way of creating shadows. ShadowLight Productions of San Francisco, founded in 1972 by Larry Reed, one of the few Americans trained in traditional Balinese shadow play, uses a similar technique. His experimentation with form led to "live animated films", combining cinematic aspects such as electric light sources to create live action montages.

Of course, modern interpretations of traditional practice are not always fully taken into account. Alex Salazar, a doctoral candidate at the University of London whose thesis is on the recreation of culture and tradition through Cambodian shadow puppetry, knows well the tension between those who want to keep the shadow play static and those who want to watch it unfold. . For traditionalists, Salazar is referring to Cambodian history and the genocide of the 1970s. The Khmer Rouge regime murdered millions of Cambodians and the survivors were banned from practicing their culture. "There is still a feeling that Cambodian traditions are in danger of being lost… I think that's one of the driving forces behind people who want to strictly preserve traditions," he says.

In China, efforts to preserve the art form have taken on special urgency. Jianbo Peng, director of the Digital Shadow Museum at the Chinese Academy of Arts, has spent the past 15 years building an online archive cataloging thousands of general images and videos. He says (with the help of his son Jiachen Peng, who translated), that the conservation work is very urgent. Many traditional Chinese plays were performed by peasants, many of whom are in their sixties. He notes that young people are less interested in learning the art: it takes many years to become a puppeteer, and with the moving-image version of film and television, shadow theater seems slow and old-fashioned. "We need to find a better way to engage young people in this art," says Peng.

Rahul Pulawar, a 13th generation Indian shadow puppeteer, does not think in a dichotomous way between old and new: he prefers the term "intermediate process". Pulawar, a graduate student in the Department of Literature, Culture and Languages ​​at the University of Connecticut, believes that traditional shadow puppetry can be preserved by professionals using modern technology, preserving the authenticity of oral tradition and aesthetics. It's a dying art, isn't it? "We're talking now," he says. "Let's talk about the past and, of course, about the future."

Focus on experimentation at SAIC.

Creator Hattie Bishop Speed ​​died in 1942, but some museum workers say her presence is still felt.

This fully funded residency immerses contemporary artists in Miami's cultural landscape, where they can make connections to help advance their careers.

At the height of his influence as an art critic, Greenberg participated in "Sullivan" psychotherapy, the same cult I discovered later as a child.

Former journalist Sim Chi Ying questioned the primacy of archival sources as he deliberately decided what to include or exclude.

The Computer Accent follows dance-pop group YACHT as they use artificial intelligence to create their 2019 Chain Tripping album.

The use of technologies such as NFT and live streaming has been steadily increasing in the music world since the COVID-19 lockdown.

The fossil remained unidentified in the collection of the American Museum of Natural History in New York for nearly 100 years.