Is "Swimmer" based on a true story? Explains the origins of Netflix movies

Among swimmers, Yousra Mardini has a dream to represent Syria at the 2016 Summer Olympics in Rio, a dream that remains in focus even as her country is at war as she tries to escape her homeland with her older sister Sarah. to reach Europe and seek a safe way for his family, who remained as refugees.

The film stars real-life sisters Natalie and Manal Issa as Yusra and Sara and follows their characters on their difficult journey from Syria to Europe and the dangers they face as refugees.

The Netflix film's creative team spoke with Newsweek at the BFI London Film Festival about the making of the drama and the story behind it.

Is "Swimmer" based on a true story?

In short, yes. Yusra and Sara Mardini's journey as refugees from Damascus to Berlin actually took place in 2015. They were 17 and 20 years old at that time. They left the capital of Syria in August 2015 and passed through Lebanon, Turkey and Greece, arriving in Berlin in September of the same year.

His journey was difficult. At one point, the sisters are being smuggled to Greece on a boat full of other refugees from Izmir, Turkey, when the ferry's engine fails due to the weight and it begins to sink.

Thanks to the swimming skills of the Mardin sisters, everyone survives the trip. Seeing that the boat was in danger, the couple jumped in with two others, tied themselves to the raft and swam for several hours in the Aegean Sea to lighten the load. He helped save 18 lives.

Yusra also competed in the 2016 Rio Games, where he represented the Refugee Olympic Team and was coached by Sven Spankreps (played by Matthias Schweegver in the film).

He spoke to Newsweek about making the film with director Sali El-Husseini, saying that he initially did not want to make his story into a film, but eventually talked to producer Ali Jafar about it.

“When I was selected to compete in the Olympics with the Refugee Olympic team, I received many requests for books and films, and I put them off until the Olympics. "Many people say that after the Olympics, no one will be interested in history," Yusra said. .

I kept saying no, I don't want to do movies or books. Movies] you say you're interested in making a movie, etc."

After meeting Yusra Mardini-Jafar, Stephen Daldry, Jack Thorne and El-Husseini, he said he felt he could "trust" them, so he "went with him".

Al-Husseini was particularly interested in making a film about the story of Yusra and her sister Sarah, who are accused of smuggling, espionage and fraud in Greece for helping refugees on the island of Lesbos while working with the Emergency Response Center. . . international.

“I met Yousra through the news. I read about her in Rio, but I didn't know anything about Sarah," al-Husseini said. And when I read the first draft of the script, I realized that this is a film about two heroes, not just the obvious hero sitting here next to me, but his sister Sarah, the unnamed heroine.

"There's no way I can relate to this sisterhood and the fact that it's about these strong young Arab women and this inspiring story."

Yusra on her journey and how she helped actress Natalie Issa 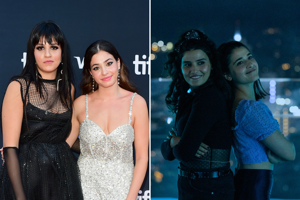 Reflecting on what it's been like to see her story repeat itself in drama with her sister, Yusra shared that she realized her experience at the Olympics could help many.

"I have always been interested in swimming. i wanted to swim and swim and swim. I wanted to be an Olympic swimmer, and when I was still fighting [the war], you can see that in the film with my identity because I'm a 'refugee'.

“I had misconceptions about it from a young age. They didn't teach me what a refugee athlete was… in my cut or head, it had nothing to do with the arrivals."

“I've worked so hard all my life to get a place as a swimmer in the Olympics. Yes. When I went there, I realized that it's not just about the gold medal. I can make a bigger difference in life and that is gold. medal and be able to help thousands and millions of refugees around the world.

"I represented Syria and under the Olympic flag I represented many countries and people in the world who were there for peace, unity and sporting values. So it was all very surreal, but I've always wanted to be a swimmer." . "

Natalie and Manal Issa spoke to Newsweek , with the former explaining that the reality star gave her some great advice when they first met before production began.

“I really didn't want to ask him all about the trip and everything. I wanted to know how his life is now and how he is,” Natalie said.

“And within five minutes of our meeting, it was really smooth. We really hit it off, and that was enough for me to love him and love the character he was going to play."

The actor said: “It was actually the first script that I loved and had feelings for his character. I felt like I understood him. I felt connected to him, even though the people around him didn't really understand him, and he's dying to do it."

“I've read his book and everything, and I think it's a really beautiful and inspiring story. It's just a connection that I feel, and it's very rare that I feel connected to someone, so I wanted to bring it to life."

Adding that she really enjoyed the opportunity to act alongside her sister in real life, Manal said, "I think it's fun to have a story about siblings, and I loved that we were sisters and that we got to play them." than I can ever imagine playing with anyone." 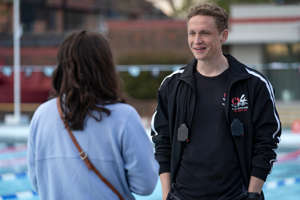 © Laura Redford/Netflix From left, Natalie Issan as Yusra Mardini and Matthias Schweigfer as Sven in The Swimmers Schweigfer told Newsweek about meeting his co-star in real life. Laura Redford / Netflix

Spangcrips swim coach and actor Schwegofer also spoke to Newsweek about the film, Schwegofer said that he "always wanted to be a swim coach" and that being a part of the film was "a dream come true, a bucket list item." swimmer

“I don't think we had a lot of time [together], but it was intense. It was intense, so we got directly involved," SpangyCrebs told Newsweek about working with his on-screen partner.

"We fell in love the moment we met," Schwigfer said. “He was great. I mean, he was a great coach, and he's still great."

Spangcrips explained that he also worked hard with El-Husseini to build the film's narrative in the second half of the film, when Yousra begins training for the Olympics.

He would talk to the casting director about "how it went and how I felt at the time, or how I saw the girls coming" so he could "feel what was really going on."

Swimmer is now available on Netflix.

2 thoughts on “Is ‘The Swimmers’ Based On A True Story? Netflix Film Origins Explained”