Radical climate protesters around the world are increasingly using valuable works of art and art galleries as political fodder for their activism.

On Sunday, two activists from the "Last Generation" group threw mashed potatoes at a $ 110 million painting by Monet at the Potsdam museum. 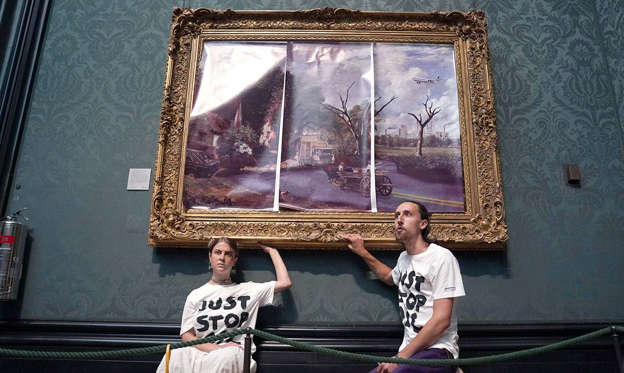 Protesters attach their hands to the frame of John Constable's "The Haystack" after he was the first to cover the painting with his own image at the National Gallery in London on Monday 4 July 2022. Kirsty O'Connor / Pennsylvania via AP

In the same month, members of the Italian band Ultima Generazione (aka Last Generation) performed their tape in Sandro Botticelli's Primavera at the Uffizi Gallery in Florence.

And earlier this year, a man threw a cake at a painting in the Louvre.

The demonstrator spreads Gioconda with cream

And on Monday, members of the Just Stop Oil campaign broke a cake in the face of King Charles III at Madame Tussauds in London.

READ on the FOX NEWS app

In each of these cases the works themselves were not destroyed because they were covered with protective glass. But the demonstrations draw attention to a disturbing new trend. And there are fears that valuable works of art could be destroyed as more radical protesters try to escalate their activism.

Sally Hickson, an art historian at the University of Guelph in Canada, told Fox News Digital that every action must be contextualized, but she fears the next phase of this trend may be "irreversible."

“There are so many designs here. We see that many, many things people do are all about copying. When you watch your regular videos on TikTok, people react to certain things, "Hickson said." We live in a culture where everything reproduces very quickly. "

Although he sympathized with activists' concerns about climate change, he doubted their actions would necessarily attract more people. 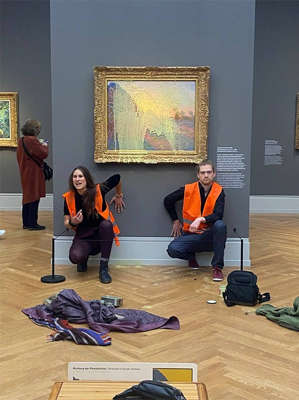 © Last Generation After throwing mashed potatoes on the painting, conservationists taped their hand to the wall. The latest generation

"Does it convince people? It is very difficult to convince people when they are blind to what is happening on the planet." I don't know if this will convince any of these people, "he said." I mean, I just think we live in a ' an age when people have deeply rooted ideas about things.

Matthew Jesse Jackson, a professor of art history at the University of Chicago, says that art is not as important in people's lives as cinema, television or TikTok, but he doubts that the actions of the protesters will make people worried about the climate change. scope

"If it's a museum painting … most people would say it's a work of art that shouldn't be destroyed," Jackson said. "I think the (non-standard) interaction with works of art is unlikely to draw attention to the problem."

Fidia Falashetti, an Italian painter and sculptor living in Los Angeles, says she sympathizes with political activism in general, but feels "a little lost" in the tactics that grab attention.

"It will divide people more than unite them," Falashetti said. "How much shock and wow effect do you want?" Because society these days is so obsessed with social media and doing the craziest things to get attention. " 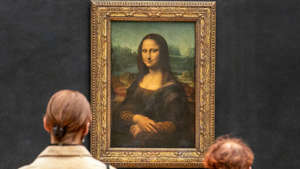 While trying not to personally judge the young activists, Falashetti questioned their decision to target Van Gogh, noting that the Dutch artist has struggled with poverty all his life.

"I think it was a little disrespectful because even though the image was on the glass [lid], I think he's a guy who felt a lot of pressure from society to do something like that," Falashetti said. "I think there are many other ways to talk about what is not working well in society."

Falashetti also questioned whether the protesters were necessarily liked by anyone, arguing that their actions could make people more hostile towards climate change activists.

“I think most people would say, look at these (protesters). what are you doing. "They don't even think about it," he said. 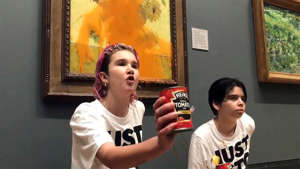 "You can find the right way to reach people's hearts and inspire them to think and act in their daily lives," Falashetti said. “But why engage in violent nonsense … and put the young and the foolish at risk? It is not the right way ".

"Art must be protected", said Falashetti, otherwise "we will not leave a trace for the future".

What do we stand for? collect, document and archive black life and culture