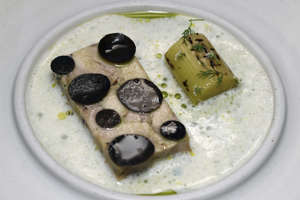 Sneak into the basement of the Art Institute, doing your best to avoid the shiny little spiky parts, and you'll find Arthur Rubloff's collection of paperweights.

Although this is the least interesting exhibit in the museum, I was still drawn to the hundreds of flat glasses. I spent hours looking at the intricate designs, wondering how the colors remained so vivid after hundreds of years.

Although the exhibit is currently under renovation, I thought about the room during the first course of chef Sujan Sarkar's unusual new Indian restaurant in the heart of Indiana's River North restaurant district. It was then that I learned to appreciate the passion fruit panipuri, a play on the many Indian delicacies known as khat.

Here, the stuffed cylinder bite is reinterpreted with a jellied orange ball, cold and wavy on a simple puree paste. It shines like stained glass in the light, and the edible flowers add color. The dish is impressive enough to hang in a museum, and when you bite into it, it delivers an equally amazing fruity sweetness, herbal freshness and crunch. What a great way to start a meal! 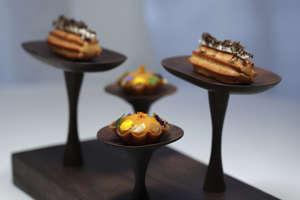 Although it's only been open for a few months, Indiana offers one of Chicago's most interesting and delicious menus. It is one of the most affordable in the city. At $95 for the vegetarian menu and $105 for the chef's tasting menu, dinner here is about $200 less than some of the city's fine dining restaurants. The combination is no longer attractive.

Although the government is very interested in India, it is adamant that the price will not go out of control. "I want people to try my food," said Sarkar. “When I was a young chef, I couldn't afford to go to those expensive places. Also, most places don't cook it right. They are healing things. I want to be a chef."

One way the government is doing this is by cleverly avoiding the trap of automating common luxuries. I never complain about eating caviar, but I don't think every dish on a tasting menu should be accompanied by a large dollop of egg. When I see foie gras, it's usually the least interesting dish. Yes, there are truffles, but they are kept in moderation and the unusual, earthy flavor enhances both dishes.

And the meal is a strict seven-course affair. "I think seven courses is a very good balance," Sarkar said. "Eating after that can be a drag."

The last time Chicagoans saw Sarker was in 2011. He also runs Ruh's Kitchen, which opened in the West Loop in 2019. (It got three stars from former Tribune food critic Phil Vettel.) and the Rooh store in San Francisco. But by the time he landed in the Midwest, he was a chef in his own right, traveling to half a dozen cities on three continents.

In India, Sarkar offers both a tasting menu and a vegetarian version, which can also be egg-free. On a recent visit, my guest and I tried both and couldn't decide which we liked better. (Government may have a vegetarian menu, although you must notify the restaurant within 48 hours.)

After the excellent pani pur, the course continues with an exploration of khat, this time dealing with potato khat. Potato wedges are baked in a crispy nest on top of a delicate curd mousse and crispy panna cotta, topped with three wonderful piping colored chutneys. Every bite is crunchy, creamy and full of flavor. That's another win.

It's only the third course that the two tasting menus really diverge. Sarkar said he knew he always wanted a vegetarian option, especially since many people in India eat vegetarian food on a regular basis. Besides, he finds the preparation of the garden more interesting. "Meat is easy to cook," says Sarkar. "But it takes a lot of effort to get the right texture for vegetables."

Sarkar describes the fourth course on the vegetarian menu as a play on the sambusa. But Sarkar uses yuba instead of flour. "Soy milk is leather," says Sarkar. "I wanted to cut back on gluten." The crunchy wrap consists of creamy edamame and potato and is topped with yellow chili pachadi, sweet but very spicy.

It goes without saying that the meat menu is worth a try. One of the most enjoyable dishes of the evening was the Chicken Malay Tikka. Instead of serving pieces of chicken, Sarkar prepares a rectangular chicken tray made from shredded thigh meat. Each is topped with a few well-placed pieces of truffle and accompanied by a soft braided leek. It all boils down to the malai sauce made from Amul Paneer, a very popular Indian processed cheese. Sarkar says he has a soft spot for the product, and it definitely adds a salty and bitter note to the velvety sauce.

The chef's tasting menu culminates with the Lamb Men, a perfectly prepared rack of lamb with four dynamic flavors. The only thing holding this dish back is that it's a bit stale (too many bland sauces).

The dessert section allows Sarkar to showcase his childhood love for sweets. "In Calcutta, you eat sweets first, and you eat sweets too," says Sarkar. Both menus are filled with a variety of delicious dishes, each one unique. Vegetarians can fill up on besan barfi, an Indian dessert flavored with unsweetened chocolate. You'll find Ramalai (air) on the chef's tasting menu. Ramalai, a traditionally popular Indian dessert, consists of cardamom-infused paneer in thick milk. Sarkar replaces the cheese with a reindeer-like meringue to give the dessert a fancy look.

It has an Indian a la carte menu which I tried at the bar one night. I missed the development of the tasting menu, although you can try a few additional dishes such as the duck hash.

But I love cocktails. They're each named after a city, and while they're not necessarily consistent, they're pretty interesting. Grab a deli that combines mezcal, goat cheese, apricots, and grapefruit to create this delicious drink. The wine list is also impressive. Instead of dividing the bottles by region or variety, you'll find them grouped by artistic movements such as Pop Art, Impressionism, and Abstract Expressionism.

Indian is already one of Chicago's most exciting new restaurants. But I do not deny that I partly thought that the government would quickly move to another city for another project. Fortunately, he's too concerned to be here.

"My address is Chicago," Sakkar said. “I've lived in many big cities, including London, Dubai, Bangkok, San Francisco and New York. Now I am very proud to live in Chicago. I made a good decision to open India here.

Noise. The conversation is friendly.

28 thoughts on “Review: Indienne Offers One Of Chicagos Most Pleasurable And Reasonably Priced Tasting Menu Experiences”