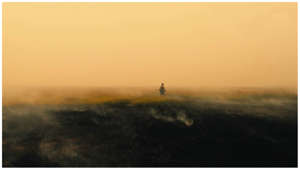 Party Film Sales has released the trailer (below) for Alexander Abutorov's "Paradise," which premiered in IDFA International Competition. The film was produced by Rebecca Hauzel for the French Department Petit Productions in association with Abbotorov Siberiad, Luc Peter Intermezzo Films and ARTE France Cinema.

"Paradise" takes place in the summer of 2021, during a heat wave and severe drought in northeastern Siberia that has destroyed millions of hectares of land. In this region, in the heart of the taiga, the city of Shologon will soon be shrouded in heavy smoke. Scattered by the wind, the black ash brought disturbing news: the forest was burning and the fire was fast approaching. Left to their own devices by the government, the people had to fight what they called the "dragon".

This powerful visual film clings to the story of Saka as the wind blows on the sacred mountain. As the wind blew the fire closer and closer, this traditional story suddenly became a headline. The camera helps the men enter the fire zone to put out the fire. This hell is strong evidence that the climate here in the polar regions is changing faster than anywhere else.

In the year The film is Abutorov's second feature-length documentary, following his debut "Son," which premiered at the Berlinale Forum in 2018.

IDFA Party Series IDFA's Frontlight Premiere includes Stephane Malterre and Garnes Le Cais' "The Lost Soul of Syria," an investigative report focusing on several European countries' efforts to bring the Syrian government to justice for its crimes and perpetrators. And the title of the best holiday "We, students!" "Polaris" by Rafiki Fariala and Ainara Vena.