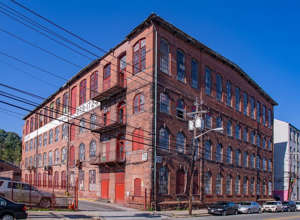 © Contributor Photo/NorthJersey.com The future location of the Art Factory in Paterson

Patterson, whose controversial Arts Factory complex is at the center of a theft lawsuit against the city, won a renewed permit to allow music and dancing in banquet halls.

Councilman Michael Jackson voted unanimously against extending the permit. Jackson has repeatedly argued that the Arts Factory is in violation of city laws, as has long-time defender of Art Factory Mayor Andre Sayegh.

"That's where the biggest crime is in the city of Paterson," Jackson said during a discussion on the issue Tuesday.

Start your day smart. Get all the news you need in your inbox every morning.

But other councilors said there was no reason to reject Art Factory's license renewal application. Councilor Luis Velez said many successful community events have been held at the Arts Factory campus.

"Let's have some fun," Velez said during the vote. – Let's have fun.

The attorney, Paterson Building Code Officer Jerry Lobazzo, ruled that the Art Factory's operations are subject to what is known as a "permanent use permit."

Jackson rejected that explanation, arguing that the building had to go through new zoning permits when it went from industrial to commercial.

Another city employee, Jesus Castro, sued in federal court, alleging that Sayegh's administration moved to promote and investigate possible violations at the art factory. Castro recently reached a preliminary settlement in the case, court records show, but city officials have not yet released details of the settlement.

Construction official Labazo has his own lawsuit against the city, accusing Gilmour and Castro of espionage.

A factory was located in the complex of buildings on Yalova Street, known as the Art Factory, for almost 150 years. After the industry closed, the current owner, David Garcia, purchased the property in Great Falls.

Garcia renovated several buildings, rented out pop-up art businesses, and in 2015 threw a big Christmas party. But the city authorities intervened and canceled the party, and the venue was closed for fire safety reasons. .

Gilmour made the call in 2011. The first ball at Sayeghen was booked by the Arts Factory in 2018, although the venue was not licensed for dance and music.

Four years ago, one of Sayegh's first press conferences as mayor took place on the Art Factory bus, announcing that Garcia would provide transportation to historic downtown Paterson. However, this service was not completed.

Joe Malinconico is an editor at Patterson Press.