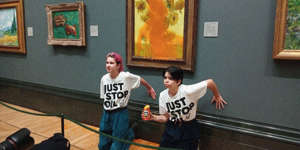 A cry of anger. Shocked moans of pain "Oh my God".

These are the first three reactions heard after two British climate activists spilled tomato soup on one of Vincent van Gogh's sunflower paintings at the National Gallery in London in a video that went ultraviral earlier this month.

The emotional register of these reactions—anger, sadness, surprise—was a harbinger of what was to come. They predicted many people's most common reactions to the action on social media, and one activist asked, "What's worth more?" art or life?

Its basic principle is simple: we dream of a catastrophe.

Tension eased somewhat when the painting was discovered to be glass-covered and undamaged, and activists said they knew the soup would not destroy the painting. But the incident did little to stem the whirlwind of controversy, and in the days that followed, the event sparked debate about the wisdom of temporarily desecrating large works of art to draw attention to an imminent environmental disaster. catastrophe

Since then, climate activists have repeatedly taken similar measures. German activists poured mashed potatoes over Monet and a climate change protester taped himself to Vermeer's Girl with a Pearl Earring in the Netherlands. Although these actions targeted protected artworks, they continued to provoke strong feelings of anger and shock.

Much of the debate has focused on whether altering and damaging beloved artifacts is more beneficial or detrimental to climate activists. Some policy and climate analysts have published research arguing that action extremism can be effective when it raises awareness of the issue and has more credible support from more moderate factions of climate activists. Other studies have shown that this can backfire by alienating supporters.

I still can't say how I feel about whether these protests will be conducive or detrimental to further action on climate change. I don't know if they see this as effective activism, they seem to anger a lot of people who are sympathetic to their cause.

But I certainly can't judge them, and I find them strong for two reasons.

First, its basic premise is correct: we are descending into a catastrophe, and something boring and exciting must be done to wake us up. For those of us who live comfortably in the North and allow ourselves to ignore the climate impacts that are already wreaking havoc on the fringes of global society, some vigilance is in order. cause discomfort. I dare not be angry with activists who fail to hurt people for such a just cause at a time when nothing beats mass mobilization to build a relatively sustainable global economy and society.

Second, something big is happening here in the form of performance art. Actions evoke memories because they act as a microcosm of the terror that awaits us. Attempting to destroy what we hold to be the most beautiful and worthy of preservation is certainly an important question about whether we are doing enough to combat climate change. Indeed, rising sea levels, storms and wildfires will eventually destroy much of our world's greatest cultural heritage. Along with the pain we feel at the specter of losing artworks that document the real world, we receive an important reminder: we must protect nature with the same zeal we protect the fine art that captures it.

The next time you see one of these protests, remember to put aside questions about activist effectiveness, stick to the emotions you're feeling, and let them spur you into action.

This article originally appeared on MSNBC.com